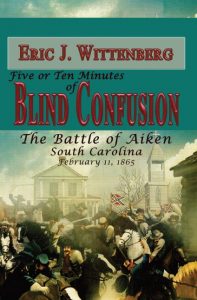 One of the few Confederate battlefield victories in the dark days of 1865 occurred at Aiken, South Carolina, on February 11, 1865. Aiken itself had little strategic significance to either side; Union Maj. Gen. William T. Sherman had intended to by-pass the small resort town. Sherman intended that his cavalry commander, Maj. Gen. Judson Kilpatrick head off in the direction of Augusta, Georgia to confuse the Confederates of his true target, Columbia, the capital of South Carolina. Since the Civil War began in South Carolina, both Sherman and the men of his army were eager to punish its population.

Maj. Gen. Joseph Wheeler, the commander of the Confederate cavalry forces, had another idea. Aiken is approximately 13 miles from Augusta, Georgia and the largest gunpowder works in the Confederacy. Wheeler feared that Kilpatrick intended to destroy the powder works, which were critical to the continued military viability of the Confederate armies.

On February 11, 1865, Wheeler set an ambush and drew the Union cavalry into his trap at Aiken, then pounced with nearly 3,000 Confederate horse soldiers. The urban street fighting was short and brutal. Kilpatrick himself was nearly captured, and only hard fighting by his troopers saved his command, which was able to extract itself from Wheeler’s trap. Wheeler followed, and a full day of combat ended with one of the final Confederate battlefield victories of the Civil War.

It was a tactical victory for Wheeler, but a strategic disaster for the Confederacy. Wheeler’s stand made the defense of Columbia untenable, and just six days later, Columbia fell. Nearly the entire downtown was burned in a great conflagration, and the Palmetto State suffered.

In Five or Ten Minutes of Blind Confusion: The Battle of Aiken, South Carolina, February 11, 1865, award-winning Civil War cavalry historian Eric J. Wittenberg tells the story of the Battle of Aiken in both tactical and strategic detail for the first time. Readers will learn of the near disaster that befell the Union troopers, and how Wheeler’s move was actually a strategic debacle. Featuring five fine maps by a master cartographer and approximately 50 illustrations, this book fills an important gap in the body of literature addressing Sherman’s 1865 Carolinas Campaign. It marks Wittenberg’s third book on aspects of the Civil War in the Carolinas in 1865.